The hero of anti-heroes: Deadpool!

Marvel Comics’ Deadpool is the ultimate super-antihero. Needy, and neurotic, Deadpool is a wisecracking mutant mercenary who is essentially the black sheep of the X-Men family. He has razor sharp wit, supreme combat skills, and the ability to heal everything in his body bar his disfigured face.

The first Deadpool movie hit our screens in 2016 and was released by 20th Century Fox making it the eighth instalment of the X-Men film series. Starring Ryan Reynolds as Deadpool, and also featuring Ed Skrein, Morena Baccarat and Gina Carano, the film went on to achieve both financial and critical success.

Wade Wilson is a former Special Forces operative who, whilst working as a mercenary, gets diagnosed with terminal cancer. Leaving his fiancé Vanessa without warning so she won’t have to watch him die, Wilson receives the offer of an experimental cure from a shady recruiter. Upon accepting the offer, Wilson is injected with a serum that’s designed to awaken latent mutant genes, and gets transformed into Deadpool via some cruel torturing at the hands of evil scientist Ajax (Skrein).

After escaping, Deadpool is left with accelerated healing powers, a dark, twisted sense of humour, and a horribly disfigured face. He then sets off on the hunt for Ajax, in order to kill the scientist. He recruits mutant allies Colossus and Negasonic Teenage Warhead to help him along the way as well as a friendly, innocent taxi driver called Dopinder.

Oozing in meta references and continually breaking the fourth wall, Deadpool is the funniest film the super-hero genre has ever produced. Filled to the brim with pop-culture jokes, and overflowing with irony, it hits you head-on, with a relentless stream of unending gags and one-liners.

Even the opening credits satirise the genre, replacing characters’ names with classic stereotypes such as ‘British Villain’. It’s not all gags though. This is a film that’s hyper-violent, and filled with action, whilst still not taking itself too seriously.

Deadpool was such a popular film that a sequel was inevitable. And in 2018 Deadpool 2 was released receiving similar fan and critical reaction as the original. Funny, violent, and packed with action, the Deadpool series is one that’s sure to please new viewers, and looks set to become one of the genre’s most lauded.

Our range of Deadpool march includes: 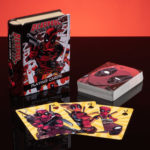 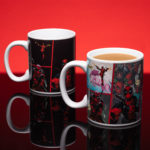 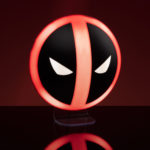