Following their morning routines inside the minimalistic Swedish hotel rooms, James and Lee met downstairs for an early breakfast in the canteen. Still awaking from a broken sleep, in large due to the incredible Scandinavian wind seeping through the walls and shaking the headboards, they raised their energy levels with a mix of coffee, scrambled eggs and fruit.  Optimistic discussions of the day ahead added to their rising enthusiasm and they left for the venue.

After a swift wind swept walk towards the Kista Conference Centre, they were met by a huge queue of GameStop store managers waiting patiently to go inside. Fortunately, their exhibitor’s passes enabled priority entry and the queue was successfully skipped. They followed the escalator up to the main hall and passed the alluring GameStop booth to find the Paladone stand set up just as they left it the previous day. With still a half hour to spare until the doors were officially opened, Lee tweaked with the layout of the stand, switched on all the battery-powered lights and James went off in search of some fresh coffee & bottles of water. 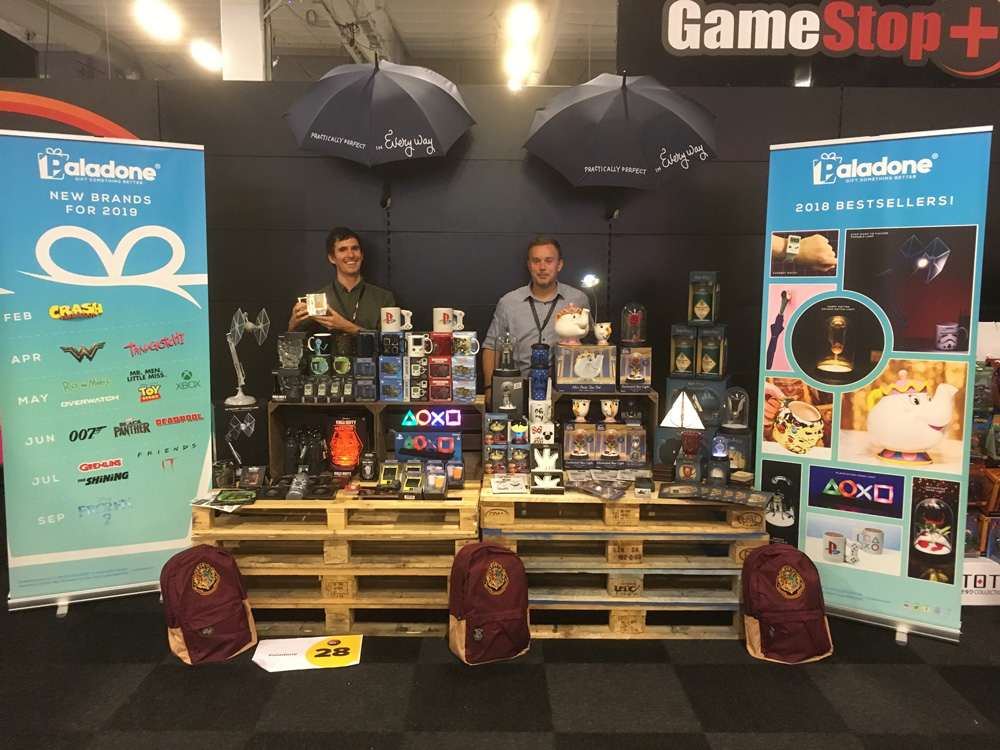 Half an hour turned to an hour and a half as the hordes of store managers could be heard shuffling into the main hall and slowly assembling into their groups.  This delay gave Lee and James the opportunity to walk around the GameStop area and view the other loot vendor stands. They perused the likes of Pyramid, GB Eye, Yu-Gi-Oh & Pokémon before talking about various show stoppers and past Comic Con experiences with Nick and Ben from Half Moon Bay.

A hand held bell rang to start off the group rotations round the hall and continued to ring every 10 minutes, turning the area into a giant game of musical chairs. After several ten minute bells (enough time for a few quick games of Asteroids on the replica retro arcade machine next to the booth) the first of the groups reached the Paladone stand. Show time! Lee & James took turns to enthusiastically present to each group of store managers this years best selling products and exciting new licenses for 2019. The level of enthusiasm for Paladone’s products was outstanding. One lady was nearly brought to tears of joy at the sight of the Mrs Potts Tea Pot, and many others were equally as excited about the Star Wars Tie Fighter Light and the promise of a Batman Batwing version next year too. At the end of each presentation, they took great pleasure in giving the managers a sneak preview of some new product samples for the coming year. Without fail, the Rick & Morty Ship USB Light and the ostentatiously shiny gold Zelda Cartridge Mug lit up the faces in each group and they left the stand excited for all the fresh loot coming their way next year.

After an hour, everyone retired to the canteen area for a mid morning coffee & a sandwich. Lee didn’t fancy his, so James ate both. Then just as the last mouthful was being swallowed, the bell rang again and the managers swarmed back to the stands. Over the course of the afternoon, a total of eighteen groups made their way around the hall, stopping only for a delicious lunch provided by the venue.  Eventually, the crowds died down and the two Paladone boys were able to rest their vocal chords and pick up a couple of coffees before exploring the hall themselves, taking advantage of no queues before the convention opened to the public the following day. Lee played the new Metro Exodus demo, as well as Call of Duty Black Ops 4 & Spiderman while James sampled Assassin’s Creed Odyssey and Shadow of The Tomb Raider before having his very first Virtual Reality game experience on PS4 in the form of Beat Saber and Astro Bot. Both of which were fantastic and blew his mind, however, it was actually the new Spiderman game that proved to be the most entertaining demo on the day.

As the managers meeting show came to an end, Lee and James packed up the stand and retired back to the hotel for well-deserved beer and a few games of shuffleboard (which Lee somehow seemed to be an instant pro at, despite never playing before).

Suited, booted and looking sharp, Lee and James boarded the third of a six-coach convoy from the Kista hotel to the Gala venue in the city centre. Sipping champagne on arrival and moving through the building with around six hundred other guests (European store managers and affiliates of the GameStop company) they made themselves comfortable at the end of one of the tables closest to the stage.  Seated around them were the many friendly Irish GameStop staff and to their left were the two jovial Dutch gentlemen from Difuzed. 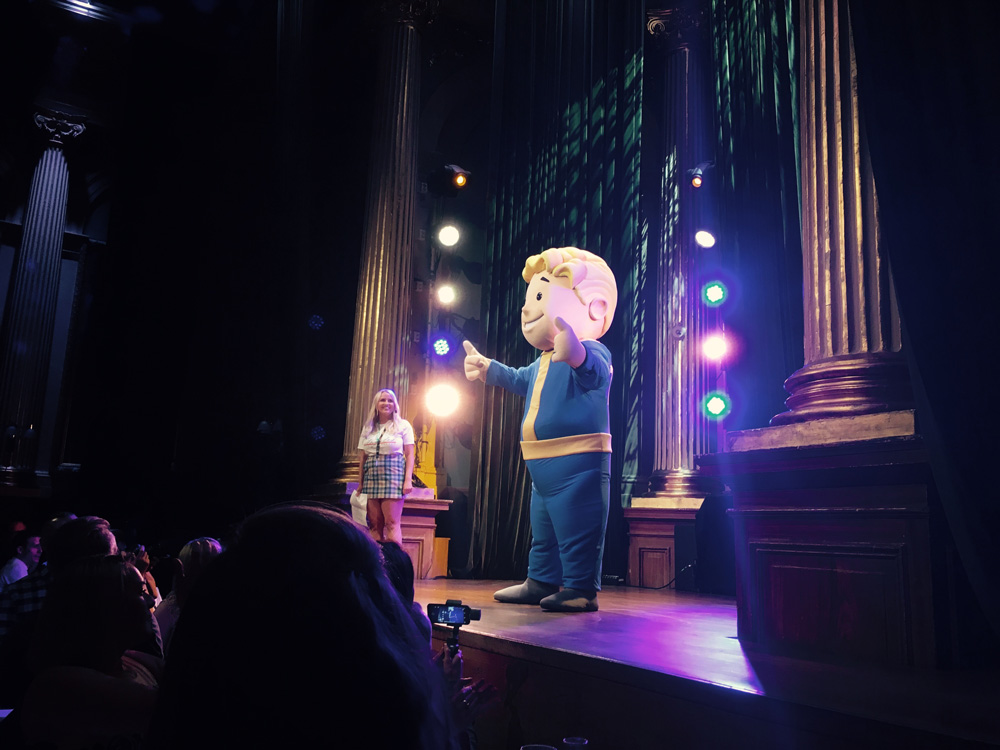 Following the first course and a couple glasses of red, Fallout’s own Vault Boy made his way onto the stage to kick start the fashion show section of the night. A group of Swedish models took turns to showcase the finest licensed apparel available in the GameStop stores.  James and Lee applauded with the arrival of each different outfit, only increasing in enthusiasm when the sixth model made her way onto the stage spinning the Paladone Mary Poppins’s Umbrella above her head.  One could perhaps say, she looked practically perfect in every way…

The main course followed the fashion show, which reminded James that potatoes au gratin are absolutely fantastic when they have enough cheese to fill a huge concert hall with the aroma. He eagerly looked down the table to see if there were any seconds left in the communal sharing dishes, but unfortunately for him, everyone else found them just as delicious. While everyone eased their digestion with more table wine, the managing director of GameStop Europe gave an impressive sales and figures presentation on the stage. This then ran smoothly onto the award ceremony, where the best performing store managers were called upon the stage to accept their trophies to keen applause throughout the hall. While the winners all met on stage, the waiting staff brought in dozen of cakes, each with a lit sparkler to announce their arrival. Awards were then also given to the best stands of the exhibition and then finally the best loot vendor. With mouths full of soft and creamy Princess cake, Lee and James were taken by complete surprise when the latter was read out. Paladone had been voted the best Loot Vendors for GameStop 2018! This prestigious award has been won by the same company for the past five years so for it to be finally passed over to Paladone was a moment of pure glory and pride.  This was down to the hard work of everyone involved within the company. 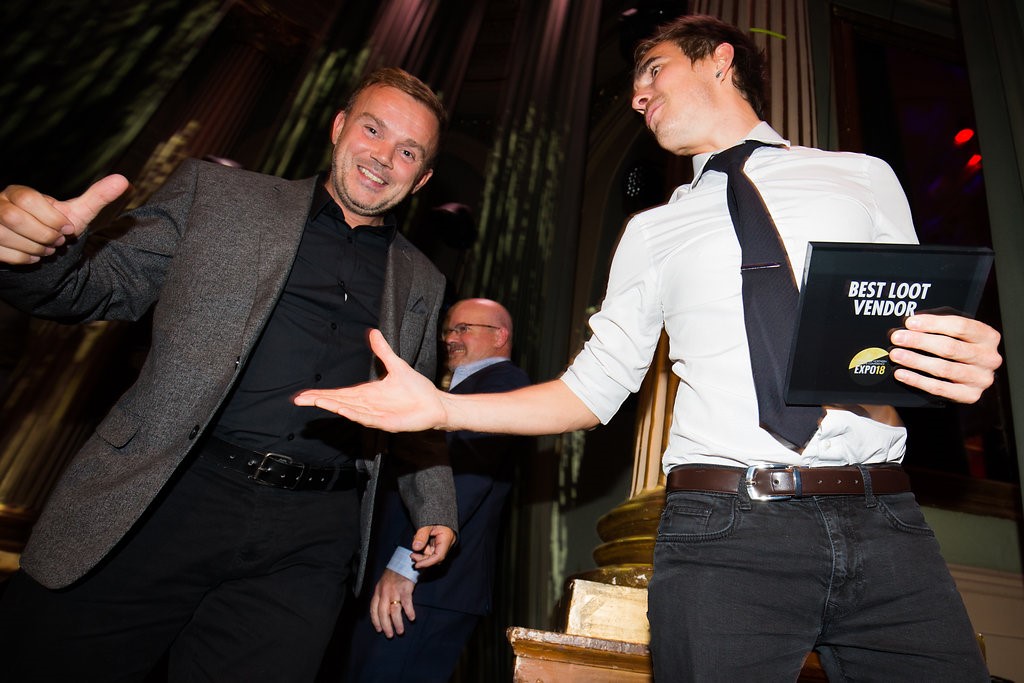 Lee and James leapt on stage to accept the award and shook hands with the CEO as the trophy was passed to them.  Once the applause had died down, all the guests to the gala finished their cake and wine while an area in the centre of the hall was cleared for the dance floor. Dancing to some cheesy classics and Swedish techno beats ensued until all the guests eventually retired.

James redeemed enough celebratory drink tokens to justify the sharp awakening on Saturday morning by the housekeeper.  Racing downstairs just in time for breakfast, he was joined by Lee, who was equally disorientated in the canteen among the dozens of people all filling up on scrambled eggs and croissants before a busy day at the Comic Con.

Once again, Lee and James were able to use their exhibitors’ badge to bypass the gigantic queue leading into the convention centre. However, no badge could have cleared the path through the thousands of excited fans inside the venue. Dozens of Pokémon, Super Heroes, Jedi’s and anime characters swarmed through the stands ready to sample all the new game demos and browse the wide variety of merchandise stands.  A lot people were also there to witness the cosplay creations as many had clearly invested huge amounts of time and effort into their costumes. 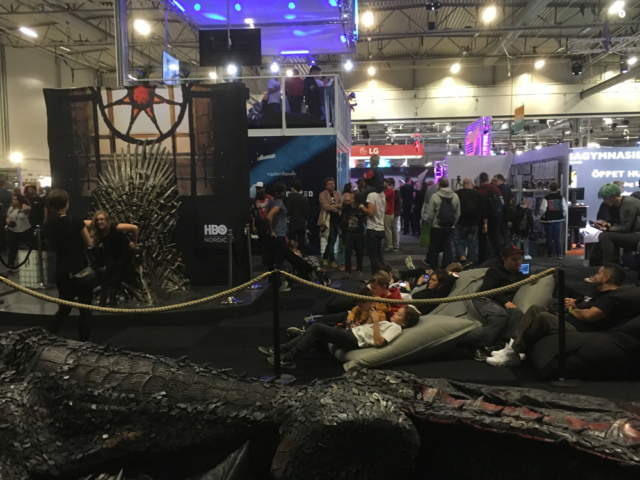 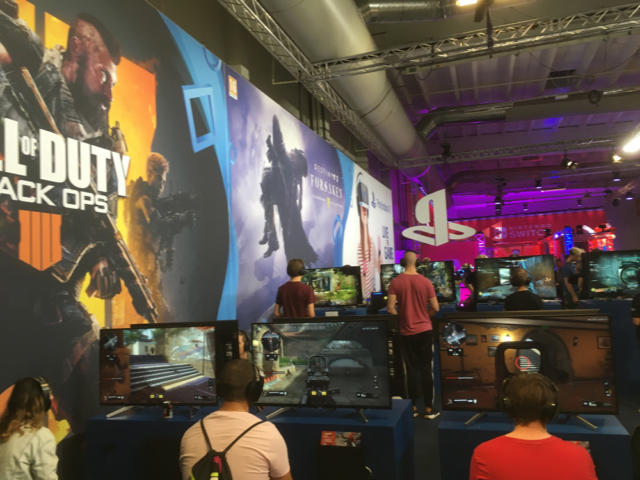 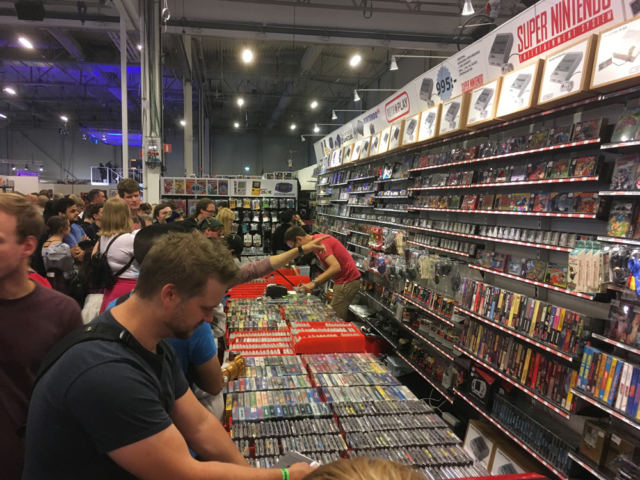 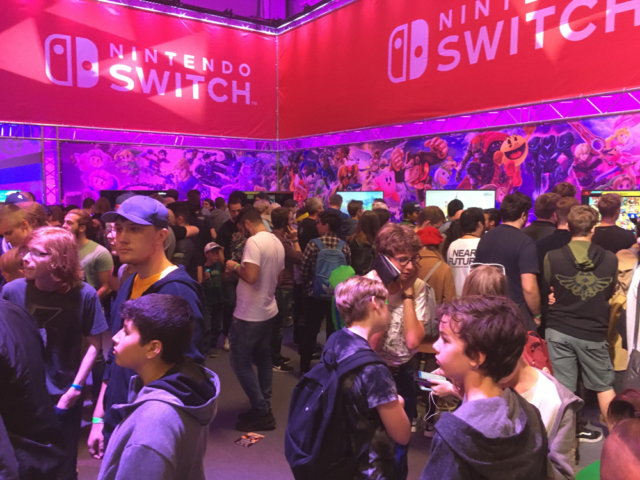 James took note of how many retro gaming references were evident in both the cosplay and the shop stands while taking care not to trip over the giant sleeping dragon by the Game of Thrones Iron Throne replica. One stand in particular was solely selling hundreds of rare and retro games from the likes of NES, Game Boy, N64 and Megadrive. Nintendo had an impressive presence at the show too, with dozens of demo screens for Mario Kart, Super Mario Party and Super Smash Bros encircling a fifteen-foot model of Super Mario himself. Meanwhile, Lee caught up with the people on the Game Stop stand and learnt that they had nearly sold out of all merchandise within a few hours and were calling around all their local stores for more stock!

At the end of a very successful few days with the Game Stop company, both Lee and James left Stockholm with optimism for the following year.  With the continuing support from Game Stop, Paladone will continue to create a fantastic selection of products to bring joy to both store managers and end consumers alike!